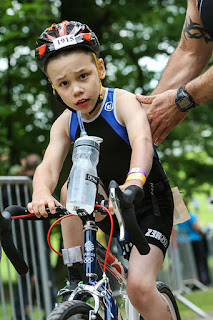 Do not ever say that you can't do something if you have never tried. On July 17, 2015 a 9 year old  diagnosed with Cerebral Palsy competed and finished the Castle Howard Triathlon in North Yorkshire, England. This boy's name was Bailey Matthews. He did what most adults couldn't even imagine accomplishing. His determination and will to do is all he needed to amount such a daunting task. Of course much planning and training took place but that is all a part of completing any given goal.

Inspired by his experience last year Bailey has organized a triathlon for kids with disabilities called the "Be More Bailey Triathlon". He has warmed so many hearts and inspired so many people. Now he is using his acclaim for the betterment of others. This is so great. One of the biggest thing anyone can do is be of good service to others. I saw him do a interview after the race and he said something so cute but encouraging "I figured I'd give it a try because tri is in triathlon."

I look at this story and say wow this kid has a lot of heart and has a big one as well. Because
you really have to dig deep to accomplish such a feat. The event consisted of a 50 meter swim, a 2.5 kilometer of bicycling and a 750 meter run. He affirmed his success. He told his father this is that this
is what I want to do. He set his own pace for training and he later completed the race. It takes alot of growth and focus focus for a person to achieve a goal. And young Matthews has the full package regardless of his disability.

So what can we take away from this story. I see that you must visualize what you want. Make a plan toward getting it. And stay persistent that you will achieve your goal. Say this to yourself "I am a winner.", "I control my destiny.", " I will be successful in any and everything that I set my mind too." I do hope that this story will invoke positive energy into every person that reads it.