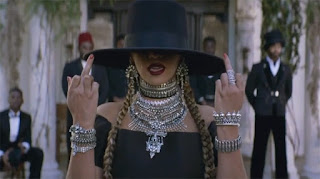 With the recent controversy over Beyonce Knowles's "Formation" video and performance at Super Bowl 2016 one would wonder is a revolution coming. No, because black folk are already here. We are accomplished and we are more and more representative of the semi-prestigious middle class of America. Excuse me but some of my followers my be taken aback by some of my views and statements in this post. Just as they where taken aback to "Formation" and to Kendick Lamar's performance at the Grammy's. Hold on to your seats, because African Americans are ready to affirm there rightful place in society.


"Cause I slay!" This is a term spoken in Beyonce's Bae Bowl (what Beyonce fans called Super Bowl Fifty) song. It is also a urban term that is being shopped around on all forms of media nowadays. Simply put it means "I rule, I hold the whip now". Beyonce is stating that she is in power and is using the song to empower. Yeah, some is like "But she shaking her a$! though". Yes, she is and she is making a sound announcement to the world while doing it. Stating that blacks in America aren't just sitting around and taking the injustice done to us. But rather we are grabbing the bull by the horns, taking it down and calling it our b$@?!.

I just recently watched a great documentery The Black Panthers: Vanguard Of The Revolution Directed by Stanley Nelson. If you watch the last quater of the doc. it will reveal that toward the end of The Black Panthers reign women took on many leadership roles. There was a role reversal that leveled out any sexism that may have lingered. Black woman are are strong beings and have no problem supporting and even stepping up for there black men. So many years of the divide of the black household upstarted by unnamed sources and government entities. People speak of conspiracy but the truth lies in audio, video and docturine. Many just choose to dispell the information which is presented.

I say to my black people to hold fast and trust in the lord. He has brought us further then we could have brought ourselves. In the infamous words of James Brown "I'm black and I'm proud." I have no problem being proud of my race and if you are of African decent neither should you.

March 02, 2016
Do not ever say that you can't do something if you have never tried. On July 17, 2015 a 9 year old  diagnosed with Cerebral Palsy competed and finished the Castle Howard Triathlon in North Yorkshire, England. This boy's name was Bailey Matthews. He did what most adults couldn't even imagine accomplishing. His determination and will to do is all he needed to amount such a daunting task. Of course much planning and training took place but that is all a part of completing any given goal.           Inspired by his experience last year Bailey has organized a triathlon for kids with disabilities called the "Be More Bailey Triathlon". He has warmed so many hearts and inspired so many people. Now he is using his acclaim for the betterment of others. This is so great. One of the biggest thing anyone can do is be of good service to others. I saw him do a interview after the race and he said something so cute but encouraging "I figured I'd giv
Post a Comment
Read more